So whenever he showed resistance to practicing his sight words I’d say something like, “Oh that”s good. Because if you learn to read then you’ll be able to read all the secret messages I’ve been writing. And I DO NOT want you reading all my secrets.”

Parker, our 6-year-old, is learning to read. Our older child, Chandler, was very motivated to learn when he was this age and by this time he already had a pretty strong reading game. He was one of the top readers in his Kindergarten class. Parker, isn’t resistant to learning to read, but he’s definitely not as motivated to work on it. It’s possible that this is partially due to the fact that Chandler had a lot more of our attention when he was 5 and 6 while with Parker we’ve had to split our focus a lot more.

I decided I needed to come up with a new way to motivate Parker to practice his reading. The number one method I’ve found to get Parker to do anything has of course been, “Defy Daddy”. So whenever he showed resistance to practicing his sight words I’d say something like, “Oh that”s good. Because if you learn to read then you’ll be able to read all the secret messages I’ve been writing. And I DO NOT want you reading all my secrets.” This got him fired up for a little while. But only a little while. So I had to take it to the next level.

Earlier this week I wrote on a piece of paper a message using only words from his “sight words” list from school. These are words he should already know how to read or is working on reading for his next lesson. The front of the folded paper said, “TOP SECRET…..not for Parker”. “Secret” is the only word I used that isn’t on his sight words list. The inside said, “I do not want you to see this. How did you find it? We do not like that you are a spy.”

I left the message in the hallway for him in the morning. When I woke him up he was grumpy as usual. “Go away!” He said. I replied, “OK, that’s actually good because I lost my top secret message somewhere out here in the hallway. I don’t want you to find it. So please stay in bed until I find it.” (Yes And!) Then I left his room and from the hallway kept talking about how I couldn’t find the message and I was afraid Parker would find it. Then I went to take my shower.

Sure enough this got Parker going and he got up and discovered the message. Big brother helped him read the word “secret” but had been instructed not to read the rest of the letter to him. It was Parker’s job to read it.

When I came downstairs to breakfast Parker was all giggles. “I read your top secret message, DAD!” He was very proud of himself. That morning on the way to the bus he said, “Dad. Let’s do another secret message tomorrow. But this time let’s be on the same team and keep the message a secret from, Mommy.”

This was huge. He wanted to be on MY team? That almost almost never happens. I was honored to be chosen. So the next night I wrote another message.

The kind of message you wouldn’t want your mom to read. 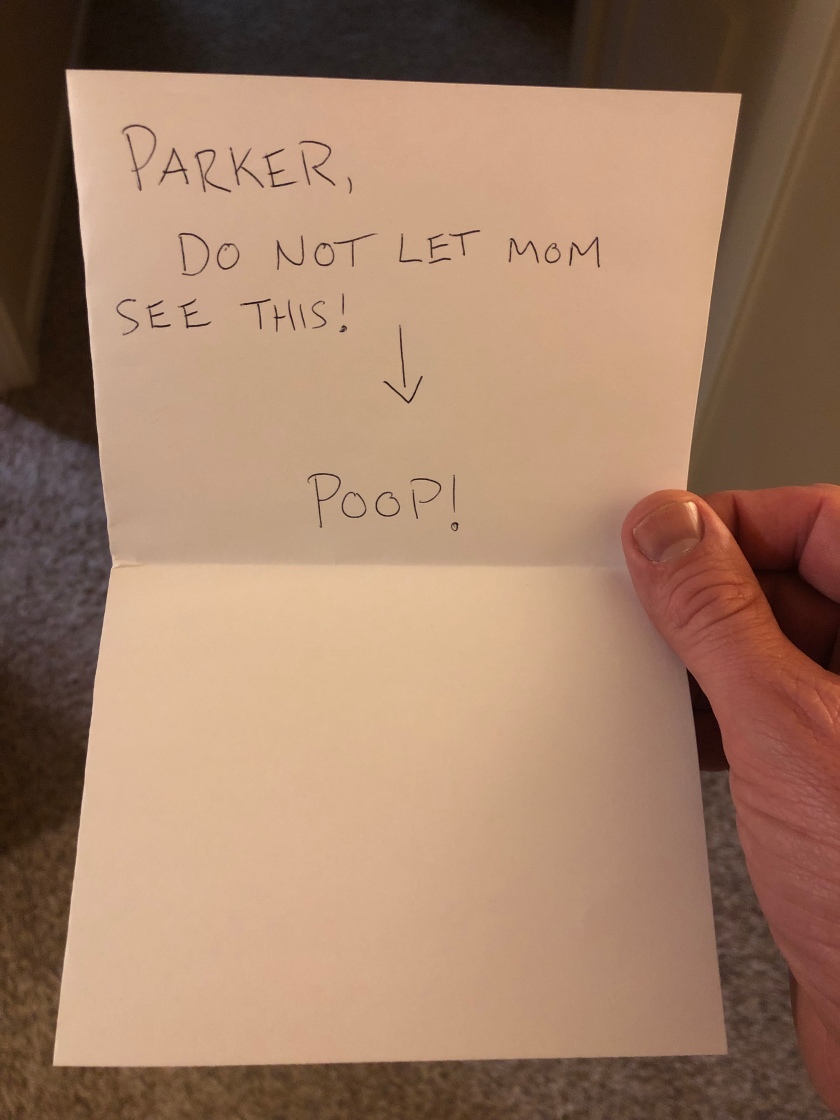 A very serious message, indeed. And of course, Parker loved it.

I’ll continue sending top secret messages Parker and report back to you on our progress.

Do you have any creative techniques for motivating your kids to learn? Share them in the comments! I’m desperate for comments!

Nate Smith has been improvising comedy since 1999 and improvising fatherhood since 2009. Nate performs at the Curious Comedy Theater in Portland, OR. Performing improv comedy keeps him young and raising 2 boys is also keeping him young. Nate is Benjamin Buttoning as we speak. View all posts by improvisingfatherhood